What an incredible two days. I want to just thank a few people and thank you all for supporting this unique opportunity. I personally will never forget these last 48 hours and have so many great memories and anecdotes about all the stories Norma shared.

Marco from Swing Patrol Berlin
Marco played a big role in making this happen and giving me a forum to pitch for London. This European tour saw only three cities host Norma with Munich, Berlin and London being the lucky ones. I offered to pay for Marco’s flight if he acted as carer for Norma and he bought Norma from Germany which is a great responsibility. Thanks Marco! We really appreciate your being there for Norma and us.

Fred Lindbom
I asked Fred to film at the Hippodrome as we want some historical footage. This was swing royalty and we wanted to have a memory. A big regret I have is that when we flew Frankie to Melbourne we had similar Q & A sessions but we were too new and naive to record it. There was no way I was going to make the same mistake twice! 🙂 Fred was awesome and I can’t wait to see what he shot!

Gordon Ferguson
Gordon was the host and fed Norma and spent quite a few hours with her. Norma loved his cats and if you were at Crouch End you would have laughed at how Norma described Gordon and his special love for his cats. Thanks Gordon.

SP Central
Sibhe, Laura & Kitty all played roles with the itinerary, hotel bookings, taxis, booking the wheelchair, setting up the venues, the list is endless and I couldn’t do without this amazing team and Sibhe event managed both evenings. Outstanding as always.

Jenny Thomas
Great to have Jenny on stage with Norma on Tuesday night. Great to see two dance professionals catching up and sharing stories.

DJs
Rupert, Laura Knight, Sally and Asif
I imagine DJing for Norma adds some extra pressure and then you have me to deal with asking for the 20th Century Fox soundtrack etc… thanks to you all!

Brian Ahearne
We are spoilt having a PR guy but when I asked him if we could try and get some media attention for Norma… I didn’t think we would get the BBC Breakfast Show. I hope you all saw it. It’s had over 2500 views in 24 hours and been watched all over the Lindy world. I know Norma loved it! 🙂

Aurora
Our ten year old asked some questions and then did some swing outs at Crouch End for Norma. This was history. When Aurora is 60 and we are all gone… Aurora will share that night that she actually did a swing out in front of one of the original swing dancers, Norma Miller. Norma also signed her Norma book. 🙂

Nancy Hitzig & Simon Bressanelli
Performed one metre from Norma at Crouch End and I could tell they were nervous but they were fab and Norma was clapping wildly.

Our Troupes
To the Skyliners, the Dinahs and the Brats… what a special privilege to perform for Norma. Thank you for your courage and I hope you all cherish this moment. I performed for Frankie once and it’s still a highlight for me. What a lovely moment for the young Brats to be applauded as “really good” by Norma.

A big thanks also to Eve, Jodie, Laurel and so many others that played a role somehow or thanked us for making this happen and supported, listened, cheered and enjoyed. As a collective energy you should all be really proud. This 48 hours bought some people together and Norma leaves us all inspired and proud to be part of the swing dancing community.

Well done and thanks…
Scottie 🙂

Swing Stars: Read about the history of lindy hop! 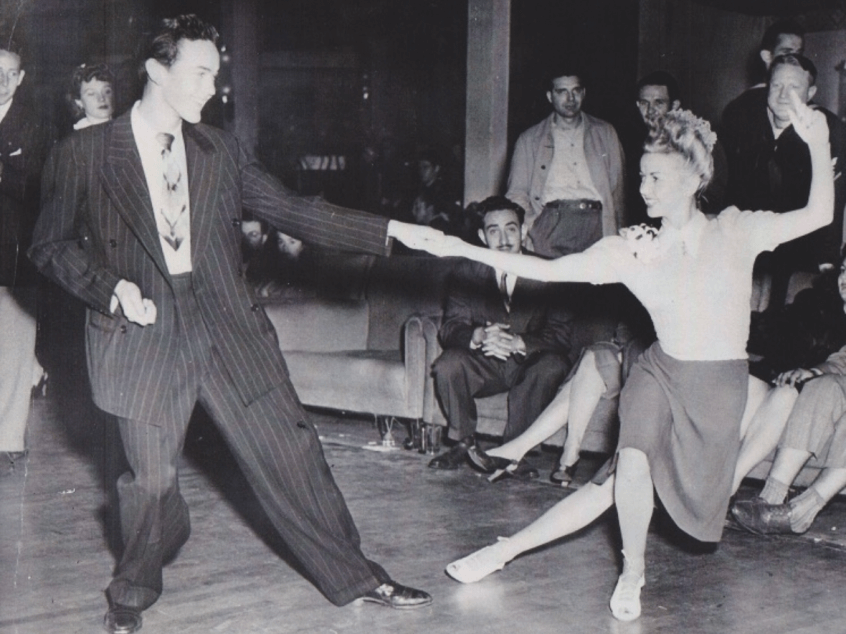 The life and times of Jean Veloz

Jean Veloz (born Jeannette Phelps) is an icon of the Hollywood style of Lindy Hop. After learning to dance with her brothers in the family living room, Jean’s career took off when she won a Screen Actor’s Guild membership card and a dance cameo in the film Swing Fever (1943) in a Hollywood dance contest. […]