Throughout the auditorium surprised murmurs can be heard as the extravagant set for the big finale is revealed: a large recreation of the old time Mississippi Show Boat, seemingly ablaze with the light of many coloured lanterns hanging from its awnings. Suddenly the orchestra’s tempo speeds up and the theatre is filled with a frenetic, loud, toe-tapping, ear-bleeding swing number. Eight dancers run onto the stage, amidst loud applause. Rumours have gotten around that the last number is something worth waiting for. People are edging forward in their seat. The dancers seem to spontaneously form a circle and they begin to dance. Their coloured period costumes seem to blur as they move.  That’s what we missed when Frankie Manning and seven other dancers from Whitey’s Lindy Hoppers, billed as the Eight Original Apple Dancers, last visited Melbourne. One reviewer described the experience;

“the eight apple dancers work up to a startling climax of colour and speed, creating a magnificent spectacle and one seldom witnessed on stage or screen.”

The ‘apple dancers’, as they came to be known, performed in Melbourne at the Princess Theatre from January to March in 1939. The dancers were: Frankie Manning, Snookie Beasley, Jerome Williams, Bill Ricker, Willamae Ricker, Esther Washington, Eunice Callen and Lucille Middleton. 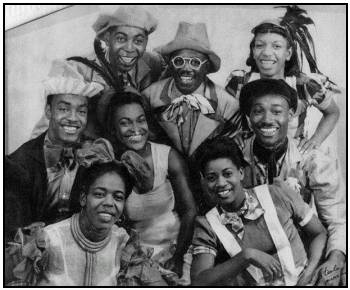 They were the finale act for a show called the ‘Hollywood Hotel Revue’ which toured many cities of New Zealand and Australia including Christchurch, Brisbane, Sydney and, of course, Melbourne. The revue was brought to Australia by Sir Benjamin Fuller, produced by Harry Howard and originally from the Winter Garden in New York. The show was compered by Maety May and featured two famous comedians, Willie and Eugene Howard, who had appeared on Broadway and in film. It also contained acrobats, dancers of various kinds, singers and more.

Melbourne program cover (1st edition)The apple dancers danced a version of ‘The Big Apple’, a circular dance of traditional jazz steps (picture the Shim Sham in a circle, sped up). It was very popular in the late 1930s — you can imagine how Australian audiences, otherwise deprived of the newest dance crazes, might have reacted. Usually this dance has a caller who yells out the next step — so the dance is never done the same twice. However, for the tour Frankie Manning had choreographed an especially energetic version. This same routine is also featured in the film Keep Punchin’. Like much of swing dancing an easier version become widely popular, but “the dance was done very mildly in the white person’s version which could not equal the abandon of the negro rendering” claimed a contemporary. In fact, it was even reported that “one of the difficulties of the company is to find an orchestra capable of playing sufficiently fast for the negro octet.”

The apple dancers really stole the show — “the rounds of applause which follow the whirlwind finish prove without a doubt its popularity with audiences” and “[they] unfortunately appeared only once, although the audience would willingly have exchanged for their delightful antics some of the more sober moments of the show” commented some reviewers. They became local celebrities wherever they went. One dancer, Eunice Callen, appeared in the news after singing the song ‘L’ill yalla basket’ (a number one hit by Ella Fitzgerald and Chick Webb also called ‘A-Tisket, A-Tasket’) which hadn’t yet reached our shores. The apple dancers were also featured in the news when they performed for disabled children at Montrose Home in Corinda.

It is an interesting aside to note that whilst the enthusiasm, energy and ability of the dancers was recognised in the Australian media it was often done with a distinct tone of condescension and racial bigotry. The feature mentioned above, entitled ‘Study in Black and White’ deliberately contrasted the white, immobile children with the “dark children” who “clapped their hands, rolled their black eyes, flashed their white teeth.” Amongst the many references to the dancer’s skin colour throughout the reviews at the time, Eunice Callen was described as a “pretty little coffee-coloured lass.”

I think it is fortunate that whilst we can’t experience the apple dancers’ amazing routine live, we can welcome Frankie Manning back to Melbourne after all this time simply as the amazing innovator and dancer he is.

Swing Stars: Read about the history of lindy hop!

Swing dancer extraordinaire Frankie Manning was a leading dancer at Harlem’s legendary Savoy Ballroom where in the mid-1930s, he revolutionised the course of the lindy hop with his innovations, including the air step. As a featured dancer and chief choreographer for the spectacular Whitey’s Lindy Hoppers, he performed in numerous films (including Hellzapoppin’ (1941)), and […]